January 2023 – “I’ve finished my New Grad term with three unique job opportunities at different Cenovus Energy assets,” explains New Grad, Nathan Newman. “I’m grateful for this experience as that kind of exposure is not something a lot of people can say they have at such an early stage of their career.”

Nathan started out as a co-op student working on the Western Canada Production team at Cenovus - which was just the beginning of his career journey.

“During my co-op term, I became friends with other Engineers-in-Training (EIT), and learned about the Cenovus New Grad Program,” explains Nathan. “I liked the idea of working for a company that put so much effort into developing their new hires with structured opportunities to move into unique positions within the organization.”

Nathan graduated from the University of Alberta with a Bachelor of Science in Mechanical Engineering and after five years of school and almost two years of co-op experience, he was ready to venture into the workforce and grow his career as an EIT. He enrolled in the New Grad Program and kicked off his first rotation working as a Contact EIT at our Sunrise oil sands operations in Alberta. Here, he contributed to projects for our steam, de-oiling, and water treatment areas to help improve safety, reliability and reduce operating costs.

In his next rotation, Nathan relocated to Lloydminster working as a Project EIT, where he worked on cold and thermal heavy oil projects such as new well completions, pilot projects and asset divestitures.

“Having the ability to work with multi-disciplinary teams in other areas of the business all while gaining valuable management and acumen skills was a fantastic experience for me,” says Nathan.

Through the program, New Grads also have the chance to try guiding and on-boarding new co-op students and EITs through the Buddy Program.

“Networking was a big factor to my success and enjoyment in my rotations,” says Nathan. “The ability to meet young professionals from all over North America at different operations has positively affected my work and formed lifelong friendships. I’ve been paired with four co-ops and two first-year EITs through the Buddy Program, where I have been able to give back to the program and help mentor new students and grads.”

In his last rotation, Nathan worked as a Strategic Innovation EIT in Calgary and was primarily involved in the development of Cenovus’s small modular nuclear reactor (SMR) strategy and assisted in the execution of feasibility studies which are one of the pathways that could help us achieve our target of net zero emissions by 2050.

With the help of the experience and mentorship gained throughout his rotations, Nathan has received his Professional Engineering designation (P.Eng) and is continuing at Cenovus as a Strategic Innovation Engineer, helping to further develop our technology roadmap. 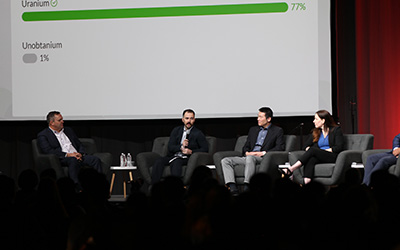 Nathan speaks at Cenovus's Innovation Summit.
“I’ve been fortunate enough to present at company townhalls, lunch-and-learns, and our staff Innovation Summit on nuclear energy,” shares Nathan. “The New Grad Program has given me these opportunities to share what our team has been working on, all while developing and sharpening my professional workplace skills. I am excited about what this next chapter of my career will bring!”
Student & new grads
Are you a student or recent graduate looking to deepen your learning and broaden your skillset? Cenovus has a fantastic range of opportunities for aspiring talent. Learn more.
Getting involved and giving back at Cenovus: New Grad Sheliza Kassam
New Grad Sheliza Kassam, has dedicated her work term to learning as much as she can and looking for opportunities to make an impact. Read Sheliza's story.
Current opportunities

Want to join our team? Check out our latest job openings.