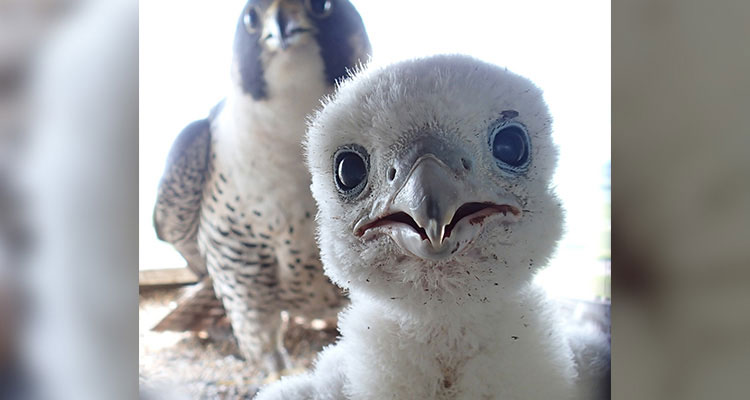 Peregrine falcons have been at our Lloydminster Upgrader to nest for a few years. Photographed is a new hatchling and female peregrine taken on site.

June 2022 – The peregrine falcon population at our Lloydminster Upgrader continues to get a little bigger (and cuter) with the falcons returning to nest again this year! And while this latest nest of babies is new, the history of falcons at this facility is not.

Peregrine falcons were first spotted at the site in 2012, and the following year our upgrader staff contacted a local falconer for advice on how to ensure the birds continued to safely visit. Because peregrines are known to use high ledges as a nesting site and prefer to have their nest in the same location every year, in partnership with the local falconer, nest boxes were installed on one of the tallest structures available at the upgrader. 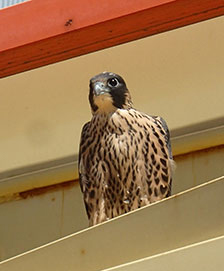 A female peregrine, fondly named Pandora by our staff, eventually became attached to these boxes and has returned to the site to hatch her babies every spring since 2018. Pandora has a specific pattern and alternates between using the nest boxes located on the north and south ends of the coker tower at the upgrader each year. 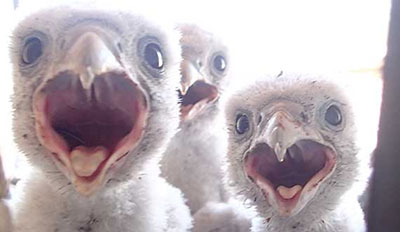 A creature of habit, Pandora and her mate always arrive at the Lloydminster Upgrader by late-March and typically welcome between two and four hatchlings every year. They then stay on site until their babies have become juveniles and can fly and catch food on their own. Then the two are empty nesters!

“The Lloydminster Upgrader Peregrine Falcon Nesting Program has proven to be a tremendous success in the recovery of this at-risk species in our local area,” explains Drew Pritchard, General Manager of Operations at the site.”

Although not endangered, peregrines are considered to be an at-risk species – which makes this unique program even more important. We continue to work with local falconers to support this incredible species and ensure that our upgrader remains a safe and desirable location for Pandora and her mate to return to nest for many more years.

Our activities on the land are temporary. Learn about the technology and innovation we use to reduce our impact on land and wildlife.

All eyes and ears on wildlife

We've been keeping a close eye on the wildlife at our northern oil sands operations. Watch this video to see what we found.

Read our environmental, social & governance (ESG) report to learn more about our ESG targets and performance.