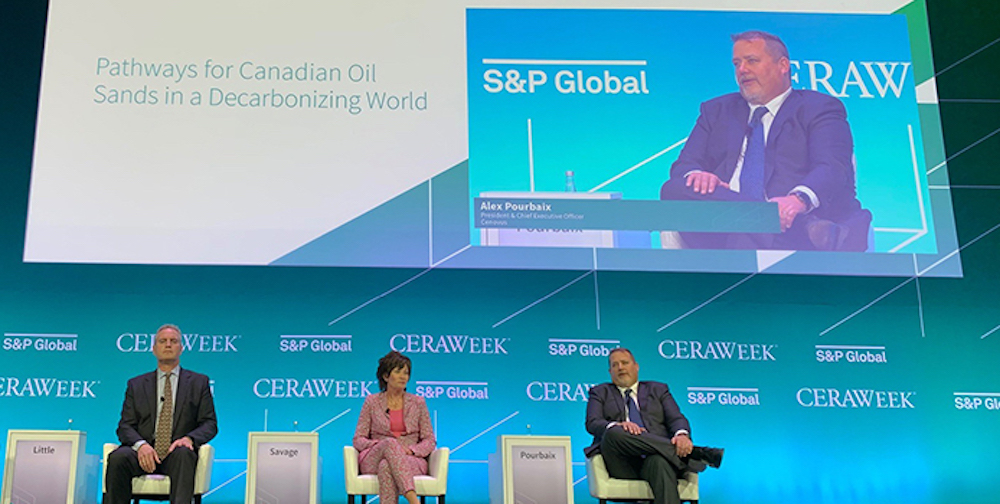 March 2022 - CERAWeek, the largest energy conference in the world, wrapped up on March 11 after hosting industry, policy and political leaders from around the world in Houston, Texas. And one of the topics up for discussion was the Oil Sands Pathways to Net Zero Alliance.

At the conference, Cenovus Energy executives, led by President & CEO Alex Pourbaix, highlighted the continued efforts from Canada’s oil industry in reducing emissions and, in light of recent world events, the importance of the oil sands in long-term North American energy security.

“We happen to have the world’s third largest oil reserves and we now have a well-defined plan, through the Pathways to Net Zero Alliance, to start reducing emissions from our production to net zero by 2050,” explained Alex. “Working together with the US we believe that Canada’s oil sector offers a ready-made solution for all of North America.”

Alberta's Energy Minister Sonya Savage joined Alex and Suncor CEO Mark Little on the panel, and underlined the importance of the Pathways Alliance to the province and the country. "I think it’s something every single Albertan should be proud of that we’ve got such a tremendous resource in the oil sands and we have companies that want to develop it and take it to net zero,” added Minister Savage.

The Pathways Alliance was launched in June 2021, as Cenovus joined Canada’s other large oil sands companies to announce an initiative to achieve a phased reduction in emissions from oil sands operations, reaching net zero by 2050. The Pathways initiative will be critical to helping Canada meet its climate goals, including its Paris Agreement commitments. Other participants in the Alliance include Canadian Natural, ConocoPhillips Canada, Imperial, MEG Energy and Suncor Energy. Combined, these companies operate approximately 95 per cent of Canada’s oil sands output.

Collaboration between industry and government will be critical to progressing the Pathways Alliance net zero vision and helping Canada achieve its climate goals. The Pathways vision will require advancing multiple technologies and will initially be anchored by a major carbon capture, and storage (CCS) pipeline connecting more than twenty oils sand operations to a carbon sequestration hub where carbon captured from production can be safely stored deep underground in geological formations. The pipeline and storage hub will also be available to other industries in the area looking to reduce emissions.

“The oil sands sector can play a significant role in helping Canada meet its Paris commitments, and also ensuring sustainably-produced Canadian oil will remain the product of choice for people around the world,” says Rhona DelFrari, Cenovus Chief Sustainability Officer & SVP Stakeholder Engagement. “Oil sands oil is not only going to be lower cost, it’s going to be low or no emissions in the future and is a stable source of energy for the world. That’s something every Canadian can be proud of.”

Read our environmental, social & governance (ESG) report to learn more about our ESG targets and performance.

Climate & GHGs
We recognize the growing global concern about climate change, and we share the goal of reducing GHG emissions. Learn about our climate & GHG ambitions.
X
Cookies help us improve your website experience.
By using our website, you agree to our use of cookies.
Confirm